It was harvest time in the Academy garden earlier this week . . . or at least that is what I thought. I was excited to see that the carrots planted last year by Mrs. Murray and Mrs. Pearce had come to maturity. I envisioned surprising the students with a snack of carrot sticks that they had grown. That was the plan.

I was shocked by the result! The stem was broad and strong and the leaves were at least a foot or more in length . . . the top of the carrot as it peered out of the garden bed looked bright orange. Every indication was that this carrot was ‘ready.’ So, I pulled, and pulled . . . and this is what revealed itself! 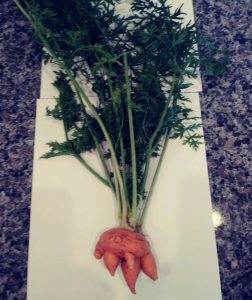 I shared my discovery with Mrs. Murray and the Primary Class students who were enjoying time on the playground. They helped me to see the carrot as a claw. One friend thought they should eat it, another wanted to take it home. I explained that this carrot was very special and we needed to find out what had happened to make it grow this way.

The ‘carrot claw’ then made its way to the Science Lab, where students in Mrs. Marino’s class quizzically wondered what had happened. A science inquiry was begun! I share with you some of our Middle School students’ responses to the question ‘what happened to make the carrot grow this way?’

Academy students offered some great possible explanations for our ‘carrot claw’s’ appearance. From the imaginative reaction of our young learners to the application of knowledge by our older friends — their ability to wonder, inquire and hypothesize was fully on display. The presence of this unusual carrot invited an opportunity to delve deeper into a practical problem and to think critically about what could have occurred to produce the unexpected result observed.

This week it was a carrot and I cannot wait to discover what will spark the students’ imagination and curiosity next!

United on this journey of discovery,

PS- My own investigation found that too much nitrogen in the soil causes ‘branching’ in carrots Moniruzzaman, M., et. al (2013). So, our friends with the thoughts about the soil were on the right track!