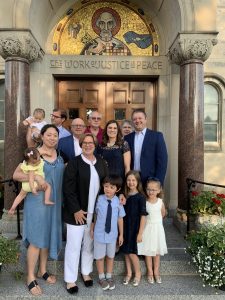 One year, as the school was preparing to celebrate Philippine’s Feast Day Mass in November, Beth Metcalf was talking with her Third Class students about our school’s beloved foundress. She was so engrossed in sharing details of Philippine’s life that she lost track of time … and her class totally missed MASS (with white dress uniforms and all)! Beth was completely immersed in Philippine, as she, in her beautifully engaging way, made Philippine’s life come alive for her students.

Beth’s own experience as an Academy student began at the age of 10. Her father, Jon (who had come from Croatia when he was 15 and later founded his own company, Klaric Contracting) was building the gym at Villa Duchesne where he was introduced to the Religious of the Sacred Heart and learned about the Academy. He decided to switch his daughters Marion (Class of ’69) and Beth from their parish school. Her earliest memory was being tested by Sister Steppe, who hired Beth as a teacher years later.

She shares, “At an early age I walked onto this campus with my parents and felt something unique about my surroundings and the Religious of the Sacred Heart. The sense of community, the striving for excellence and the love of learning are still a part of my experience here.”

Beth commuted from Bellefontaine Neighbors, riding the bus with the North County Contingent. She recalls initially being petrified of Sister Ghio, but felt the kindness of everyone. “The nuns were part of your family when you arrived here. They looked at you as a whole person – emotionally, intellectually and spiritually.” From her first day in fourth grade, she felt a connection with her entire class which would ultimately become the last high school class to graduate from the Academy. The Class of 1972 remains deeply connected to this day.

Beth fondly recalls Field Days, where she could shine in athletics, teachers like Ms. Brady and Ms. Kiefer and trips to New Orleans to play basketball. The Sesquicentennial in 1968 was a highlight, as Sacred Heart students came to St. Charles from around the country to celebrate. “Everyone was in 110%, no matter what they did,” she says. She also remembers the day they learned the high school would be closing and the sadness she felt for those who would not be graduating. She laughingly admits that they probably stretched some privileges, being the last graduating class.

After graduating from the University of Missouri – Columbia, Beth returned to the Academy in 1976, and primarily taught First and Third Class. “I was full of joy watching a child learn something new and realized I had a natural ability to communicate and break down skills so my students were successful,” she says.

“Her energy and passion for teaching makes every child who walks through the door of the Academy feel truly like that ‘one child,’” says daughter Jesse Metcalf Miller ’93. “She made daily sacrifices to ensure that my two brothers – Jon, Class of ’95 and Zac, Class of ’98 – and I received the same education and Sacred Heart traditions… She has spent 50 years within the walls of the Academy; it has been a school, workplace, career, and above all a home to her.”

While she has shifted from classroom teacher, her gifts to Academy students remain indelible. Now as our Librarian in the lovely, light-filled former Chapel, she opens the world of literature and instills in our students a love of reading. Beyond these invaluable lessons, she offers life lessons in kindness and compassion, being a friend to all, treating others with respect and striving to do one’s best.

Her classmate Barb Luczkowski regularly volunteers in the Library and says that she often looks up from the circulation desk to see Beth preparing for her next class or putting books away and she is overcome by a sense of peace, being in a place that she loves with her lifelong friend.

Through her Kaleidoscope Global Studies Class, Beth continues to expand our students’ minds. Just as Philippine was called to cross boundaries, she sparks that interest with Academy students as they explore countries like Korea, Afghanistan and Brazil. As Beth exposes children to the cultures and customs of countries around the world, she helps them to realize that even with our differences, we are all God’s children. By broadening their understanding and acceptance, she inspires children to open their hearts and minds to others, and with it fosters community and furthers the mission of Sacred Heart education.

Over and over, Philippine said, “yes” to anything that was asked of her. In 1988, Beth agreed to a very special, yet terrifying, request when she had the privilege to participate in the canonization ceremony in Rome. Her daughter was initially slated to read at Mass, but when they arrived at St. Peters Basilica, they learned that she was too young to serve as a reader. Beth stood in and had to sing the Latin Mass parts! “I prayed to Philippine the whole time,” laughs Beth. “She would’ve been so humbled by the international collection of people. It was an unbelievable experience. She has the most special place in my heart and always will.”

Her close friend and Academy principal, Marcia Renken ’72 shares: “Beth’s positive and generous spirit enriches the lives of all around her. ‘Yes, I can do it,’ is most often her response. She is an extraordinary educator who has touched the lives of hundreds of students. Without a doubt, she is one of Philippine’s daughters.”

As we enter into the third century of Sacred Heart education on these holy grounds, it is my honor, on behalf of the Alumni Coordinating Council, to present the 2019 Rose Philippine Duchesne Award to Beth Klaric Metcalf.