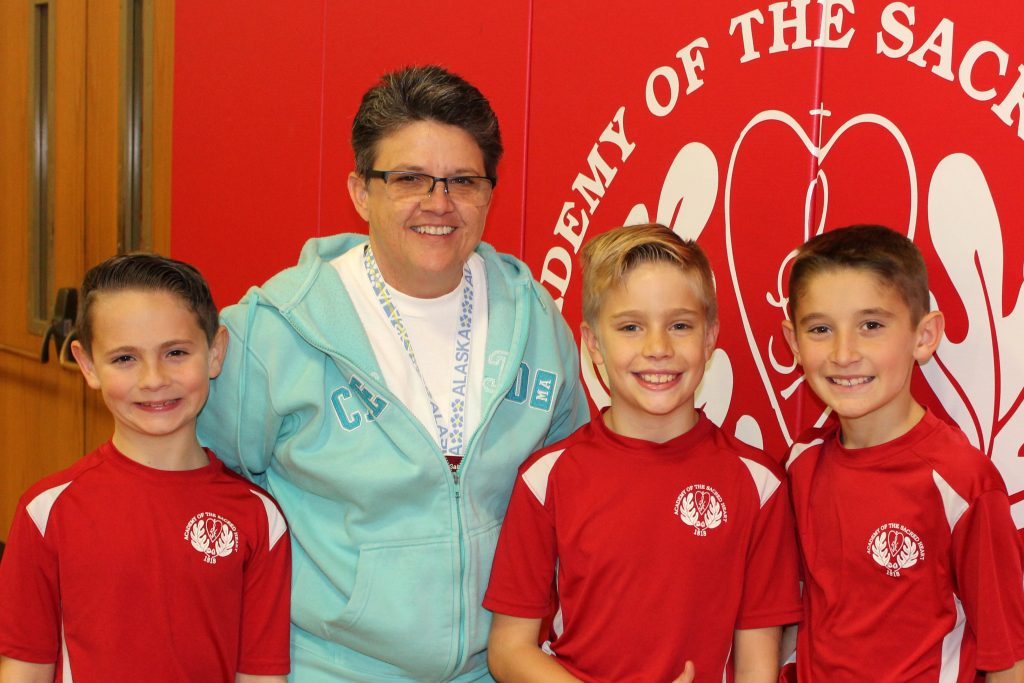 From an early age, Sue knew she was going to grow up to be a teacher. Excelling in physical education and athletics, she decided to continue with that as a career. Her long-term goal was to teach and coach basketball at the college level.

Sue attended Saint Louis Community College at Meramec where she played intercollegiate basketball for two years before completing her degree at Southeast Missouri State University, majoring in physical education (K-12) and minoring in health certification (K-12).  She was hired to teach and coach volleyball and basketball at her alma mater, and completed five years there. She decided to return to school to pursue her ultimate dream. While attending the University of Missouri, Saint Louis in pursuit of a master’s degree, she hired on at the Academy of the Sacred Heart to teach elementary physical education.

Sue sees her responsibility as a physical educator as one of the most important roles in the school. She loves the opportunity to teach students from an early age how to live a healthy lifestyle and how important it is to become lifelong movers. She firmly believes that all students are special, that each possesses a wide variety of talents and skills, and that it is her mission to expose all students to a wide variety of activities to encourage them to discover and enhance these skills and talents. Her desire to stay current in her field motivates Sue to utilize the most up-to-date educational practices.

Sue’s dream changed from thinking she wanted to work with the oldest learners to dealing with the youngest possible learners. She believes that she has the best job in the world.

“Who else gets to play with children every day and receive a paycheck for it?” 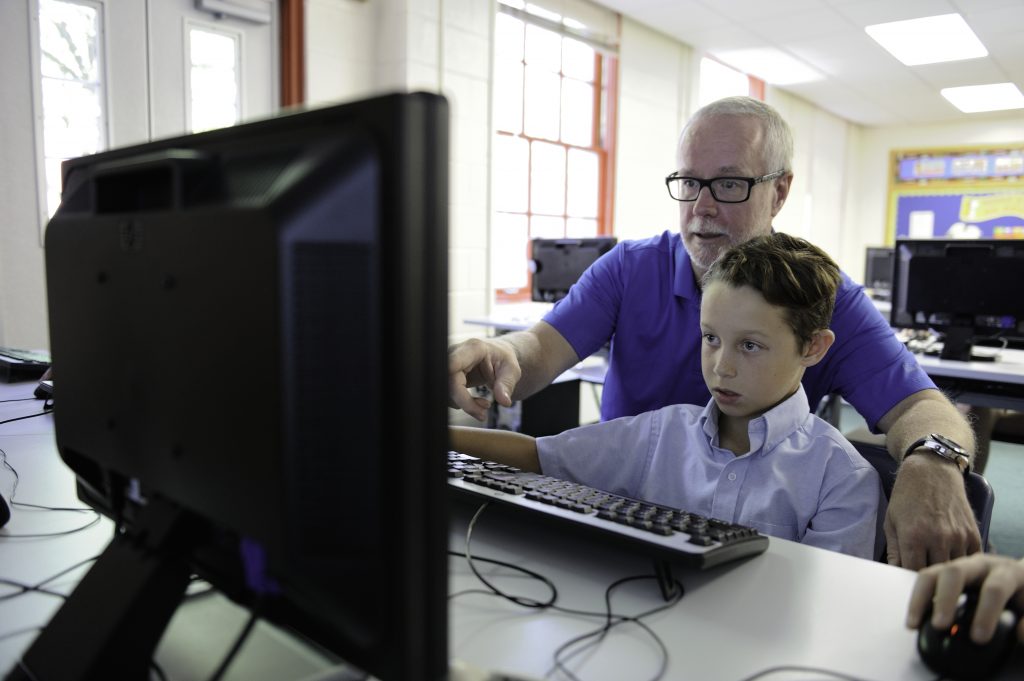 While working at a camp for physically handicapped children when he was a student at Lindenwood University, John was moved by the opportunity to make a difference in the lives of children. The experience inspired his own passion for teaching and coaching children and the Academy of the Sacred Heart offered the opportunity to teach the whole child–academically, spiritually and emotionally–in a meaningful way. In his time at the Academy, John has taught physical education, American history and computer science; served as the Dean of Students for Boys; coached soccer, basketball and track, and served as the school athletic director.

Continually seeking to grow as an educator, John is a member of the ISTE (International Society of Technology in Education). Over the past two years he has attended the ISTE 2015 in Philadelphia, Pa., completing workshops in computer science and mobile application development, the Code Studio Computer Science Fundamentals Curriculum Workshop for K-5, the Developing Leaders Seminar presented by Tim Elmore, “What Great Teachers Do Differently” by Todd Whittaker, 2017 NCEA (National Catholic Educators Association) Convention, the Common Sense Media Digital Citizenship Training for teachers K-5 and 6-12 and has begun the Minecraft in Education that adds programming skills to the Minecraft environment.

An Academy alum and parent of four Academy graduates, Laurie Strickland is thrilled to be the music educator for Primary – Eighth Class. The Academy has a rich tradition of music through education, performance and worship.  Prior to joining the faculty, Laurie taught music and enrichment classes after school at ASH since 2007.

With degrees in music, education and business, Laurie has taught in both the classroom setting and privately for over 30 years. Her vast performance experience includes singing in the choir for the historic St. Louis Papal visit of St. John Paul II, performances in cities across America including Chicago, Atlanta, Fort Lauderdale and San Francisco, as well as the St. Louis MUNY.  She has performed at the White House with The Patt Holt Singers on three occasions and in 2014 sang for President and Mrs. Obama.

Laurie has served as music director for the The Patt Holt Singers and Just Kids and was a producer for their Christmas CD.  She is a founding member of her church music ministry at St. Elizabeth Ann Seton Church and was the music director for Vacation Bible School for 12 years. In 2019, she was the recipient of a “Beyond the Best Award.” She is the founder and director of “Showtime Kids,” a musical performance group for children.

In the summer, Laurie keeps busy with Showtime!, a performance camp at ASH, as well as serving as co-music director for the stage shows at Six Flags. She enjoys composing songs for worship and student performances and volunteers for Community Living. The Sparrow’s Nest for Maternity Home and Simple Gifts that she founded in 2018. Laurie lives in St. Charles with her husband, Jeff. 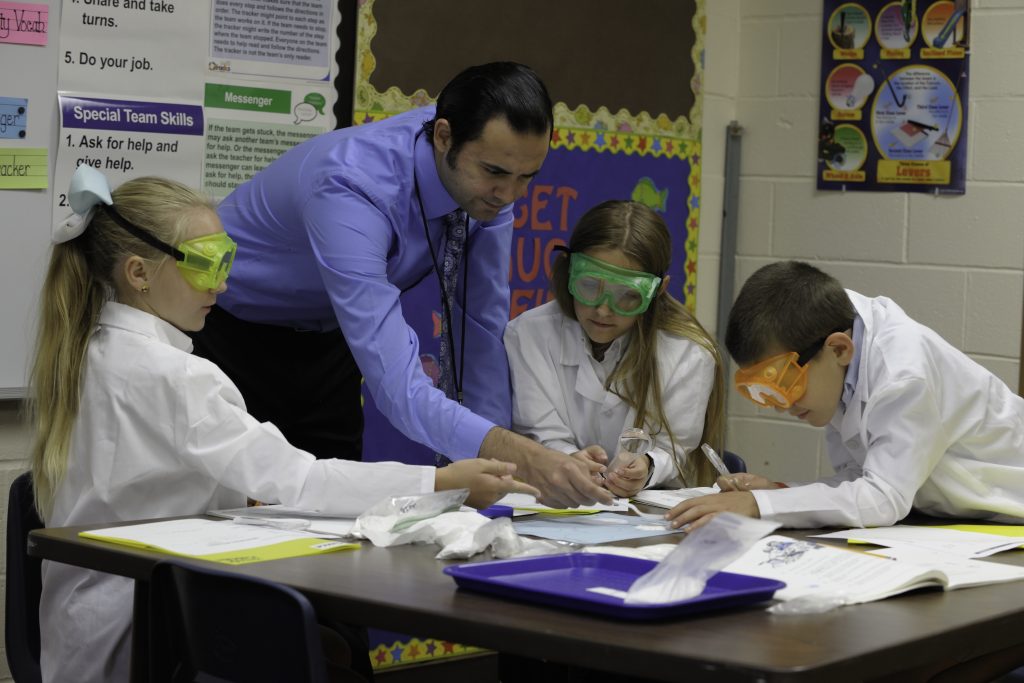 John received a B.A in elementary education from Lindenwood University. This is his third year at the Academy of the Sacred Heart.

John is pleased to be using a designated science lab for Lower School students. He has an understanding and passion for inquiry-based science education.

“It is exciting to engage our Lower School scientists in hands-on learning.”

Creating activities and experiments for specific grade level units keeps John busy. The Next Generation Science Standards (NGSS) are the foundation for the program objectives. Our ultimate goal is to prepare our students for STEM careers.

John appreciates being a member of the Sacred Heart community.

Prior to teaching at the Academy, Kayla spent five years in the Rockwood School District, teaching in various capacities. Kayla found a love for teaching when she started teaching swimming lessons at the St. Charles YMCA. Kayla enjoys teaching her students to learn and develop a new skill. Kayla loves teaching at the Academy because she feels at home everytime she walks through the doors. In her free time, Kayla pursues other creative passions such as wood working and enjoys being out in nature.

Alli worked in the Academy’s lat dismissal program while studying at Lindenwood University. This past year, she also worked as the Pre-Primary Assistant Teacher and is back helping both the Pre-Primary and Little Acorns again this year. Alli is currently getting her masters in Character Education from Lindenwood University. Alli always knew she wanted to be a teacher because she simply loves bring around children and seeing the children have light-bulb moments as they learn. Her favorite part about working at the Academy is being a part of the close knit family atmosphere. In her free time, Alli loves to travel and spend time with her family.