Jane Cannon’s “Two Hundred Years, A Legacy of Love and Learning” is proudly underwritten by her alma mater, Maryville University, founded by the Religious of the Sacred Heart in 1872 and still carryIng out the broad vision and educational mission of Philippine Duchesne.

The first establishments of the Society of the Sacred Heart in Missouri—St. Charles, Florissant and La Maison de Ville in St. Louis—tell of pioneer strength and endurance. While Madeleine Sophie Barat gave her beloved Philippine Duchesne exceptional authority, necessary for the mission to succeed, even from France she conveyed definite ideas of the appropriate size and importance her American schools should have. Though cautioning her to “go gently,” she wrote to Philippine about building en grand in St. Louis.

In 1872 Mother Barat’s dream finally took shape south of the city as a stately new academy rose on a tract of land elevated to offer a commanding view of the Mississippi. The new property, Mary’s Villa (Maryville), provided a setting both wholesome and attractive. Few houses in the Western Vicariate were able to contribute toward its construction, but history records surprisingly that “St. Charles furnished several thousand dollars,” and Chicago aided at the time of installation.

When Maryville’s boarding school opened. the plan of studies followed the six-year French lycée pattern; the classes in the two highest years were the equivalent of junior college work. Gradually those two classes became more separate and were known as “the college.” In 1923 Reverend Mother Mary Reid announced that Maryville would become a four-year college. A few years later the academy students moved to the newly opened school west of the city, Villa Duchesne. Maryville’s first college graduation took place in 1925.

Land-locked at its 2900 Meramec address in south St. Louis, Maryville moved to Chesterfield in 1961 and flourished on its new, spacious campus. The vision of Sophie (en grand in St. Louis), delivered to Missouri by Philippine, flourishes today as Maryville University. And that institution honors its Sacred Heart heritage with this generous gesture of Bicentennial support. 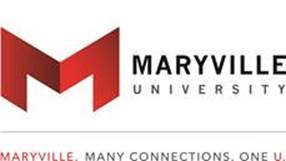